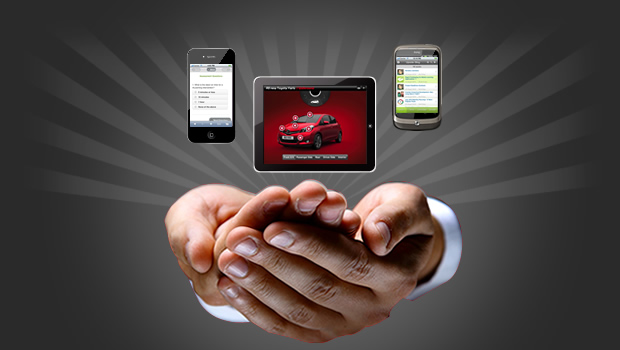 Mobile technology penetration is racing ahead in the corporate workplace, with the BYOD (bring your own device) movement affecting companies in varied ways. During some time off earlier this month, I’ve been ruminating how a ‘mobile learning ecosystem’ evolves in an organization; here are ten questions I asked. Thought you might find them interesting. This is probably the first in a series of three post, the first in which I pose questions, in the second I try to analyze the components and ‘ecosystem’ in the manner of actor/resource/process, and in the last attempt to draw some conclusions on how L&D may be able to assist the development of such ecosystems.

1. What are the factors that drive adoption?

As discussed by Amit Garg in one of his previous posts 6 Drivers Of mLearning In The Workplace, there are a huge number of factors driving the adoption of mobile devices by individuals, and by companies in the workplace. However, I’m seeking to answer (in addition to the obvious ones) what are the socio-cultural factors driving this change in what is essentially they way we use ‘personal computing’. How does a ‘mobile learning ecosystem form’, what are the factors driving the evolution of the system, and lastly, which of those factors can control or influence to hasten the development of such a learning ecosystem?

2. How does the network take form?

In biological systems, (for example – slime molds and other mycelial networks) there are clearly stages in the development of the network. We should assume something similar happens when we develop learning networks. There is the germination of a spore, a stage where the emergent network piggy backs on other existing networks as a symbiont and then finally matures to the point where it is strong enough to function on its own, and in turn nurture other younger symbiont networks. (just as an example, fungi have can have complex lifecycles) Just as in fungi, an environment conducive to the development of the network must exist, can we create such an environment artificially, or in the least, influence its creation.

3. What resources does it consume?

Any ecosystem depends on the sum of resources available (in essence energy); in nature it is the sun that drives most of the system by providing infinite energy coupled with naturally occurring resources such as nitrogen and carbon. So this type of energy must exist in a learning network, used to generate value in the network. It could come in varied forms, just like it does in nature. Agents in the network must have the ability to utilize this energy to produce ‘objects’ of value. (value for the learning ecosystem).

4. What value or content does it generate? What is the real cost of generation?

Agents in the ecosystem compete for resources actively; they look for and consume/assimilate objects of value. Agents up and down the ‘food chain’ produce and consume objects of value. They must use resources from the network and specialized abilities (in nature, producing sugars or proteins) to generate these objects. (in a learning network, an object of value could be something as simple as a document with content) As in natural ecosystems, there is almost certainly a cost to generating it. How do we account for the ‘cost’ in a learning ecosystem?

5. Who are the true participants? And is there a cost to participation?

Agents participate in the ecosystem; some do it actively, some passively. We must try and derive the cost of participation, because to participate one must communicate, interact and exchange resources/energy within the ecosystem. What might the true cost of this participation be – is it tied to the energy consumed for the agents activities within the network. Surely not all activities can be equally productive, or worth the same amount of energy expended. How does the agent determine if the cost of participation is acceptable, or do they have no choice but to accept participation itself as required from the network regardless of its efficiency?

6. Who are the true beneficiaries? Is there a cost to consumption?

As in a natural ecosystem, a learning network probably does not benefit all its agents equally; a food-chain of generation/consumption exists that functions to transfer energy through the system. In a natural ecosystem, while there is an equal opportunity to consume or be consumed, it is evident that energy is concentrated as you head higher up the food chain. Does something like that exist in a learning environment?

7. What benefits accrue to the network (the organization)?

If you look at natural ecosystems as networks, it becomes apparent that every network tends to be more than the sum of its constituent parts. So in the larger scheme of things, how would an organization (As a whole) benefit from the formation and sustenance of such a learning network within their boundaries? What are the benefits that an organization might derive? While agents benefitting is quite clear to see, organizational benefits are harder to define and quantify. To pursue the biological network analogy, a network succeeds when it occupies and dominates a certain ecological niche. Would a learning network help a company become dominant in innovation and business?

8. How does value move through the network?

In a biological ecosystem, there are elaborate food chains that connect agents, as they consume and are consumed in varied ways. A similar mechanism for the generation, consumption and transfer of value (energy) must exist in a learning ecosystem as well. It would be important to understand this aspect, because knowing how such transfers happen is the first step to being able to affect them, and later control. Value addition are unique abilities for agents, this also ties into the ‘value of the agent’ in respect to the network. Agents who can ‘add more value’ aren’t necessarily higher up the food chain, so value addition is something every agent does, how can one measure the quantum of that ‘value-add’?

9. What are the essential components of the ecosystem (without which it would not form)?

Quite simply, what is the environment in which such networks germinate. How does one identify the ecosystem – by using its constituent parts? For this a careful analysis of a mobile learning network is required – what are the components without which there is no ‘learning network’.

10. What are the essential processes that drive the ecosystem?

A system doesn’t function on the basis of components alone; the interaction between agents/objects within the network is driven by processes. We need to understand the processes (at least broadly) that make the learning network what it is. Knowledge of the interactions (almost like transactions) is important to qualify and quantify the activity in the network.

There are probably several other factors that play a role in the formation of a mobile learning ecosystem. In my next post I will attempt to describe a model that can answer some of these questions, and invariably, pose several more.