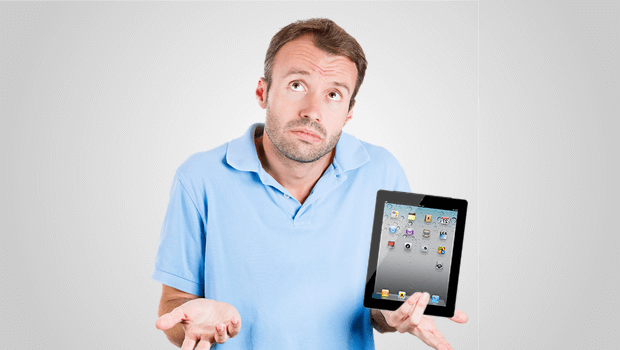 I have great respect for Apple as an organization particularly because I use an iPhone and I think the iPhone has definitely become one of those game-changers in the smartphone world and by a large margin.

I was looking forward to the Apple iPad even more so as we have been doing good stuff on mobile learning and putting up applications and tools on iPhone as pilots and on a trial basis. The iPad was supposed to be better and bigger than the iPhone, closer to a computer and much more than just a phone.

However, from whatever I have been able to gather about it so far, including Apple’s own website I think the iPad is a big miss. To me it is just a big (physically speaking) iPhone clone (that too with something like a camera missing! Whoops!). Just this morning Amit Garg asked me about the iPad being a great tool for our sales meetings and I was excited too. However now I feel that’s not going to happen. Some reasons:

1. What would I carry an iPad for? I need to connect to my family back home, talk to my team and do video calls regularly – with the iPad there is just no way to do that. If I have to carry my iPhone and a laptop anyway; why would I carry another device?

2. How do I store regular files in it? Again, it is not meant for that. Without support for MS Office – I can’t even deliver good presentations. While I haven’t seen much about this; my experience with iPhone is a great indicator.

3. The missing camera. While demonstrating our Innovation and new projects team’s work on Augmented Reality the iPad is useless without the electronic eye.

4. And most importantly – Flash support (rather the absolute lack of it). The eLearning industry thrives on Flash and without it how do I even present the great stuff we create to prospects. I have failed to understand reasons behind Apple’s continued ignorance of Flash. I am sure it is not technically challenging to build support for Flash in an iPhone or an iPad but then what is it that is keeping Apple from supporting Flash?

I’d best not make any big statements against or for Apple or any other company. Personally I was really disappointed to read about iPad. I hope Apple is not being blinded by the iPhone’s success. To me it looks like that somewhere Apple lost its customer focus while building the iPad. And as a result, it looks like I just saved a few hundred dollars. And as with all things Apple, there isn’t going to be iPad V2 with the missing elements being built in any time soon.

I would love to hear comments from peers in eLearning industry on the iPad and what it could have been for the industry. With the amount of websites out there that can help you recognize synonym It’s hard to gauge where the industry is heading. Microsoft, HP, IBM – where are your tablets? We’re waiting…