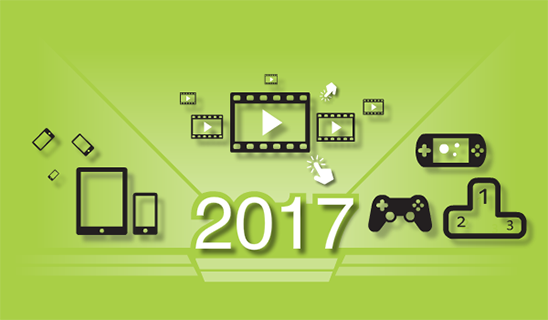 It’s that time of the year again. Time to take stock of the year that was and look into the crystal ball to figure out what lies ahead. We’ve written about eLearning trends in the past as well – here’s what we wrote in 2015. Some of the predictions we made way back then are now a reality, while others have not yet gathered momentum – to our disappointment. So for this year we have decided to list just three big trends, which we see as more near term, and not go in for any long-term predictions!

Mobile learning has been consistently listed as a trend for almost 10 years now. In fact, it has already been adopted by a large number of organizations in some form – initially by making eLearning available on tablets, and more recently through responsive courses that are accessible on smaller mobile devices as well. So in a way the ‘technical hurdles’ for delivering mobile learning have been overcome.

We are now witnessing a move towards real mobile learning, that is, mobile learning that really leverages the unique affordances of mobile devices. There’s a growing demand for Mobile First design for bite-sized chunks that can be consumed in less than five minutes as performance support or key point recaps or continuous reinforcement over time. Closely linked with this is the emerging need for viewing and tracking content offline. In our view, tracking may be needed only for some content delivered on mobiles, at least at a basic level. Considering these two aspects together, I think we are going to see a lot more of real mobile learning. The underlying premise being of course that mobile is about getting stuff done.

Videos (including both real life videos and 2D/3D animation videos) are regaining their lost glory.

In its heyday, video was THE mode of training delivery via VHS tapes. Most organizations had a library of such videos and a training room in which to view them. I myself have attended such ‘training sessions’ when I worked in the logistics division of a large auto manufacturer here in India.

But when training began to shift to web-based delivery formats, the use of videos became almost impossible due to low bandwidths available in the initial days. And video suddenly went out of fashion.

Times have now changed and today powerful mobile devices combined with WiFi or 4G/3G speeds have led to the resurgence of videos in training. YouTube is indeed one of the best examples for video-based training that we all benefit from in both our personal and professional lives.

We have earlier talked about the future of video in corporate training and have seen an increasing usage of videos in that domain in the last few years. Based on this trend, we foresee a continued surge in the use of videos for both learning and performance support in 2017. And to extract even better value, making them interactive is the key. There are different ways in which to do this – for example, having learners watch for a specific behavior or action in a video that’s playing out, noting their observations, and then comparing them with an expert’s observations; or interspersing video clips with decision point questions to form either a linear or a branching flow; or embedding interactivity within or over a video clip itself in a meaningful way so as to achieve a specific learning outcome.

There’s growing interest in games and gamification and they have become buzzwords in the industry now. However, we believe there is still some confusion surrounding these terms. We’ve tried to distinguish between them in our previous articles on Games vs Game-Based Learning vs Gamification and Gamification in Learning.

With mobile devices now firmly in the mix, there’s greater potential to implement games and gamification. We’re much more likely to play a quick 5-minute game on our phones while waiting for a bus than on our computers while at work. We’re also likelier to catch up on comments, or give a quick nod – or tap – of appreciation to a short piece of content from our phones and tablets. After all, we’re accustomed to using these devices for such types of interactions on social networking and content sharing sites.

Mobile devices also bring in the opportunity to use geo-location and augmented reality, thereby adding to the possibilities for creating game-based learning solutions.

So those are our Three Big eLearning Trends for 2017.

Tell us what you think.